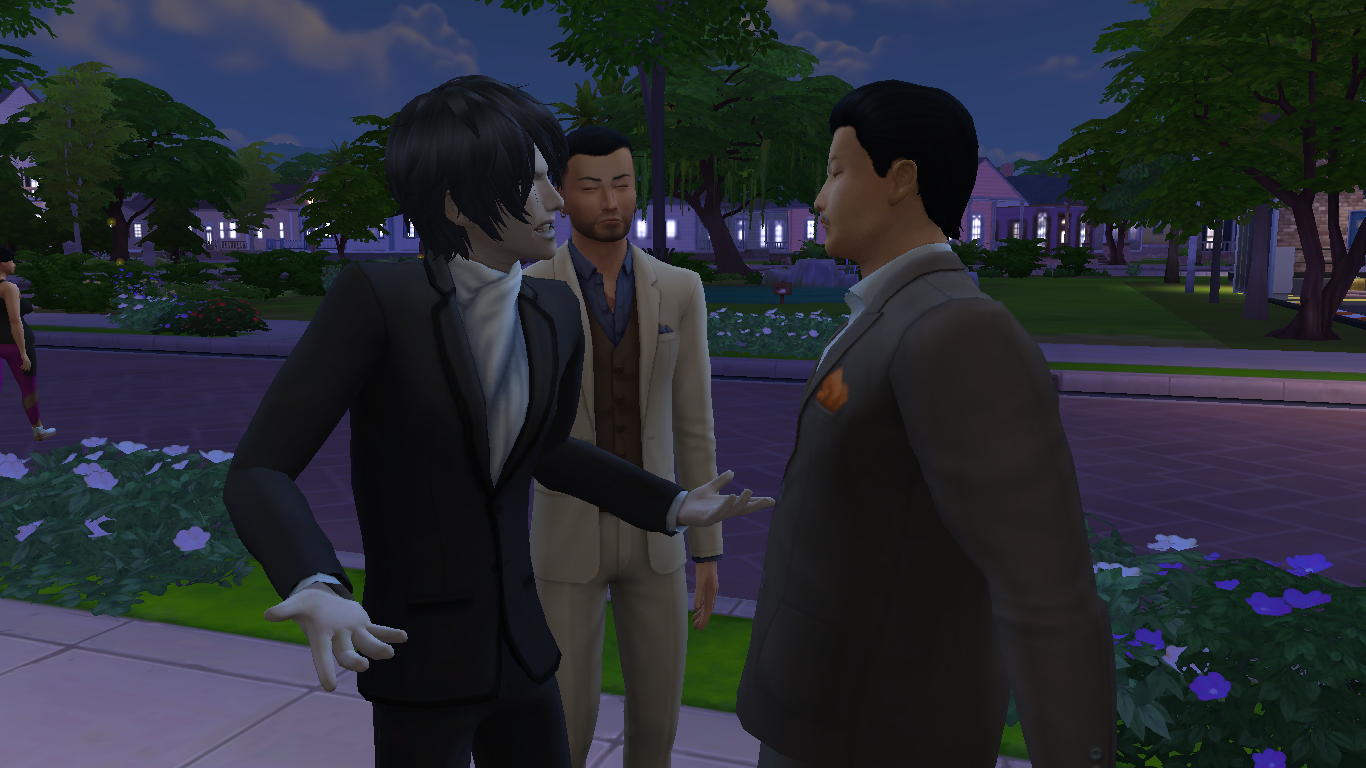 Yakuza punks. I’m not sure which family they’re from, but they’re trespassing on my territory. They shouldn’t be here.

“Let me through now!” I demand to these ruffians that appeared out of nowhere, telling me that I owe them money. This must be a scam of some sort; my own henchmen do the same thing but in human neighborhoods far away from mine.

It was a good way for funding our House, but I never thought I would experience the same thing. What a way to ruin my evening. Here I was planning to visit my friend Archon Archibald for a little sipping party and cello concerto when this happened. I chose my best suit, groomed my hair, and even polished my shoes just to make an impression at tonight’s little soiree. 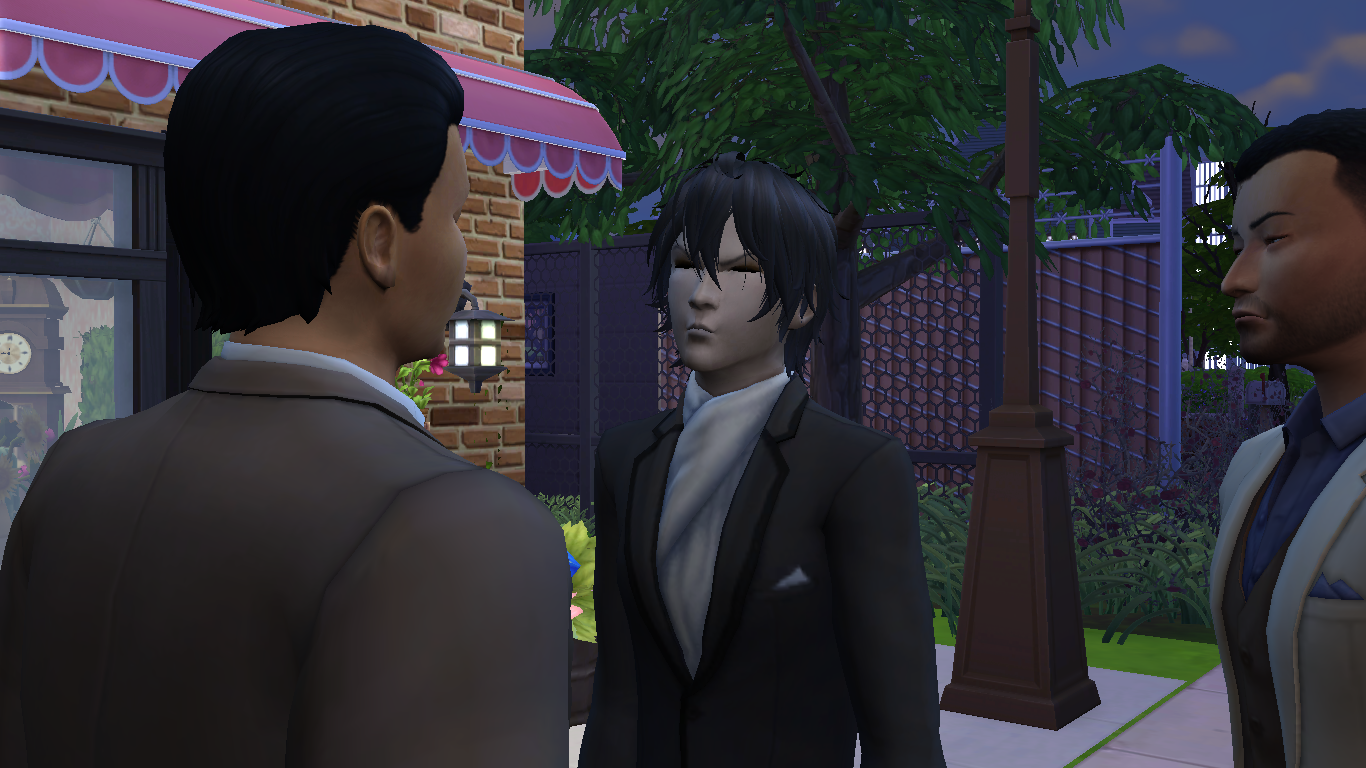 As much as I would love to arrive at the party spotless, it appears that I have to get past these cretins first. The soiree starts in ten minutes! I knew I shouldn’t have watched the latest episode of “My Dear Estella” on the historic opera channel.

“Uh-uh.” The big man in front of me grunts as I attempt to move past him. “Ya can’t pass.” The man with glasses then moves to his left to strengthen the embargo to my soiree.

“Ya sound like quite the big shot, ah? What are ya gonna do, fight all three of us?” the thug in the white suit threatens me.

I smile, thinking of how I could toy with them for a bit even if I am already pressed for time. Preston did say I could use some exercise.

I think of using my vampiric speed, but that would be a waste of energy for these thugs. I move to the right this time, but the thug with spectacles grabs my arm. 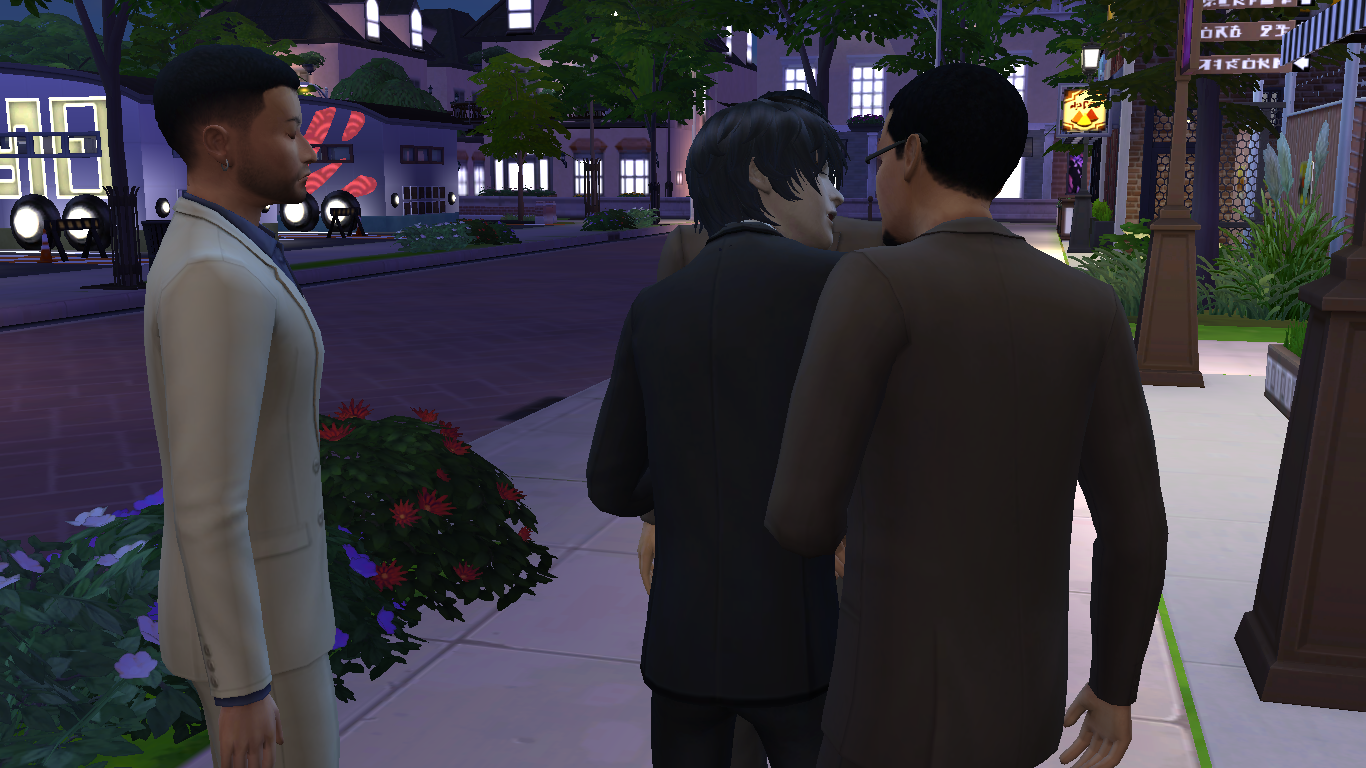 “Listen, friend.” he speaks in a cordial tone while I hide the great offense he has committed by grabbing my arm with force. “We can let you off with another deal. You can just pay us 100k for now. But you’ll have to pay off the remaining 400k for the next four months with 50% interest. Not a bad deal, eh?”

This is madness. Maybe I should show him how I pay back my debts.

“All right, gentlemen.” I pretend to concede. “You win. I’ll pay you the money.”

“Yeah! That’s what I’m talkin’ about!” the thug in the white suit approaches me. “Now where’s the dough?”

I immediately grab the arm of the man holding me with my left hand and force him down to the ground by following up with a punch to the gut. I don’t apply much of my vampiric strength, seeing that these yakuza are hardly a match for me. 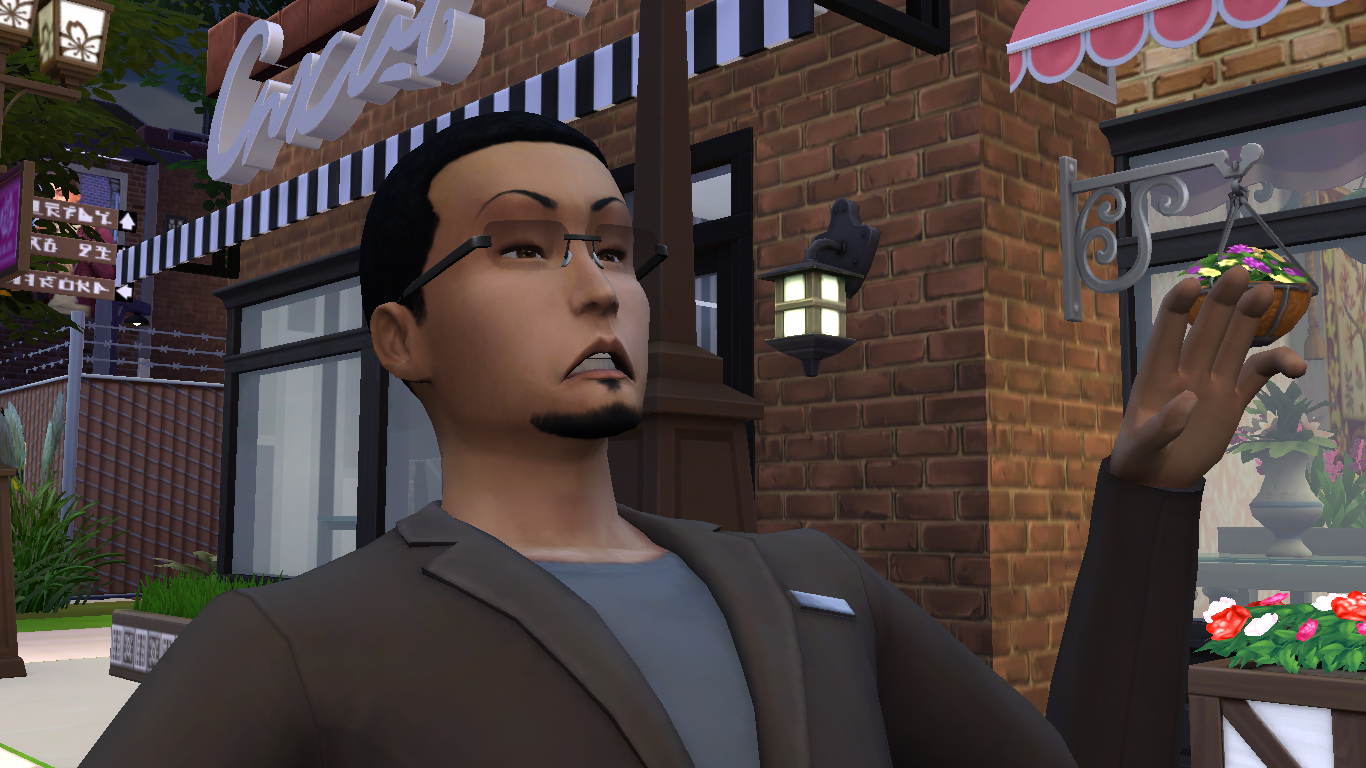 The man falls to the ground, surprised that he has been knocked a few feet away from me. His two companions look shocked. The three of them lock their eyes on me, and the upcoming fight is now inevitable. The man I knocked away gets back on his feet and shouts. 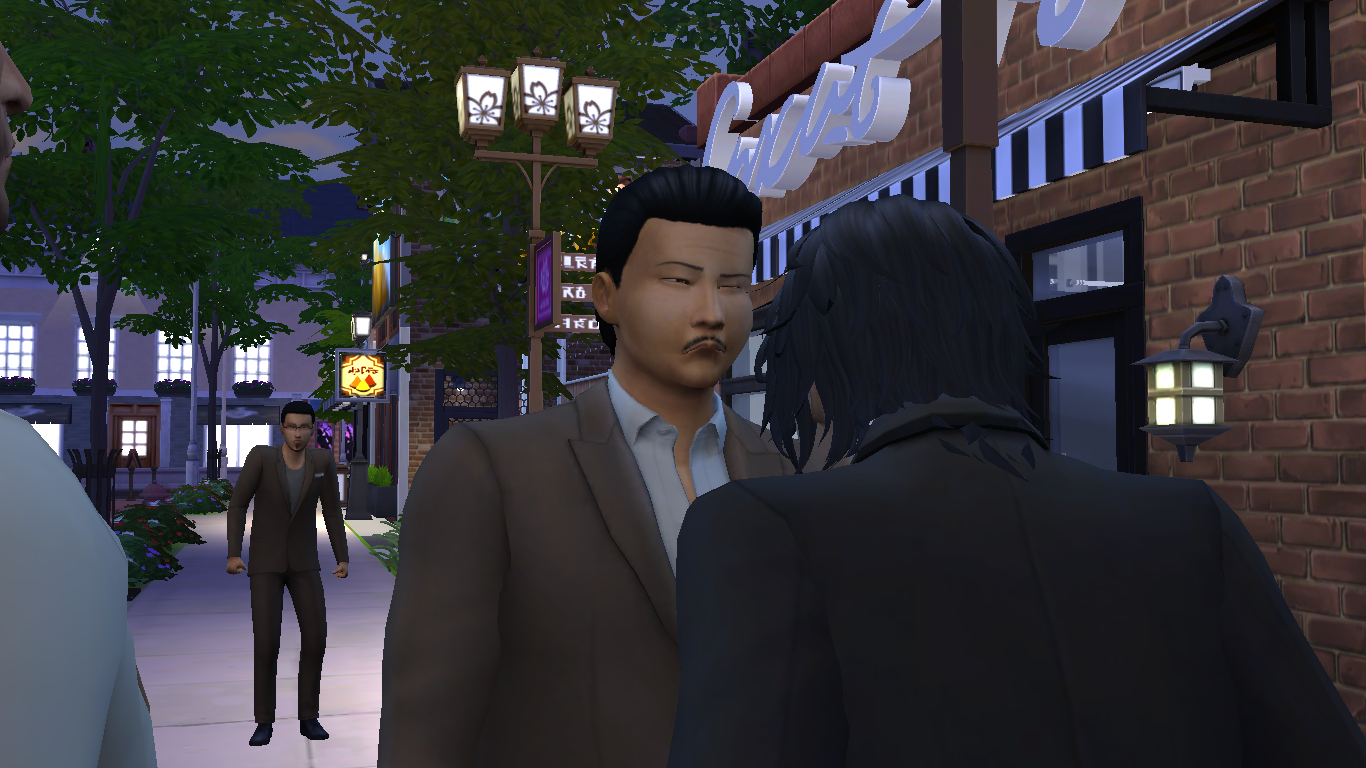 The big man in front of me attempts to grab me with a bear hug, but I back away and parry the punch of the man in the white suit by deflecting his arm and punching him in the gut. The big man sees this and uses his large body to charge at me shoulder first but I step to the side only to get caught by their leader with the spectacles in an arm lock.

Fortunately, he isn’t strong enough to resist my vampiric strength so I hurl him overhead with ease at his large companion. Both men collapse to the ground and struggle to get up, cursing at each other. My hunter instinct then kicks in as I hiss involuntarily. How embarrassing. 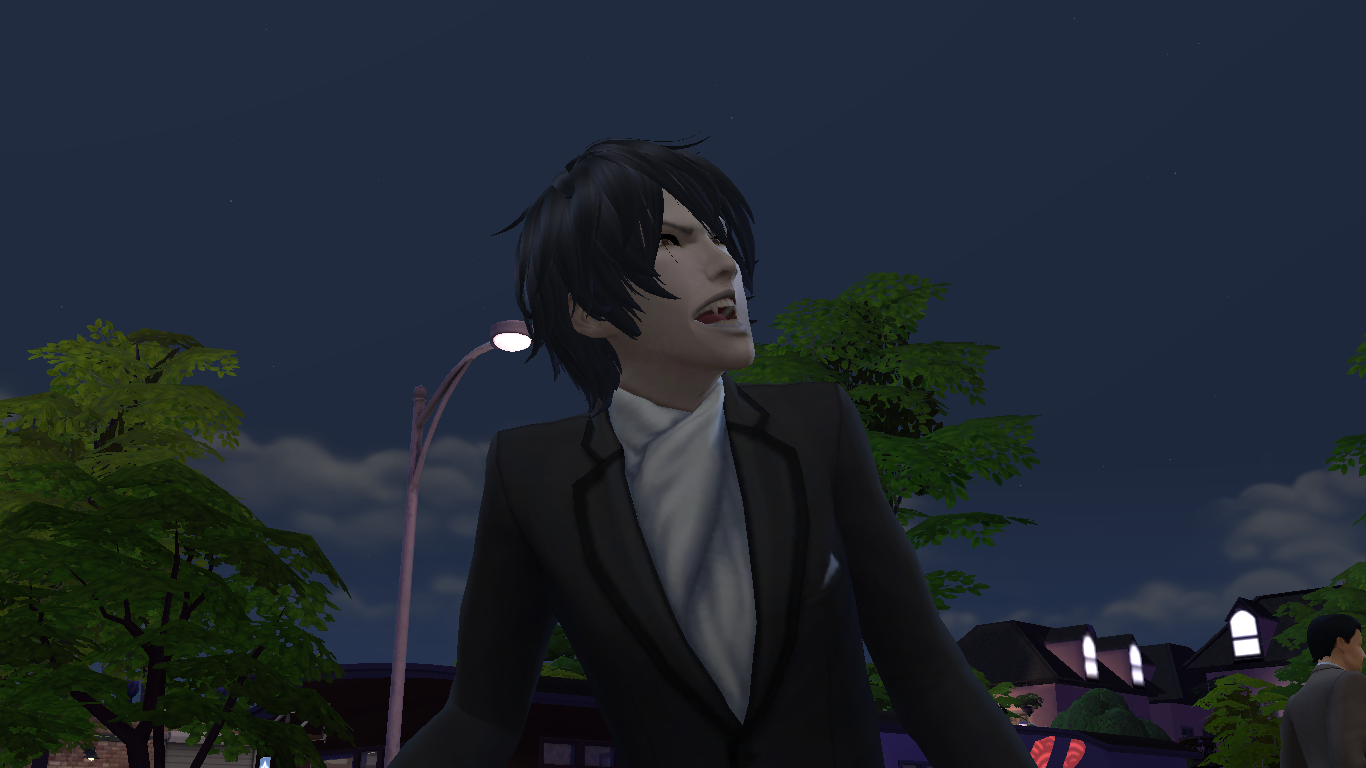 “What the hell is he? He’s a freak!” the thug in the white suit describes me as if I’m a circus attraction.

“Is he a vampire? L-let’s get outta here, boss!” the big man suggests.

“There’s only one of him and three of us! We can still beat him!” the man in the spectacles attacks me again with a punch. This time, I catch his fist and start twisting his arm. As he squeals in pain, I end his misery by using my elbow to break his arm downwards. I top that off with a roundhouse kick to the cheek. He reels on the ground as his two other minions charge at me.

The man in the white suit attempts to perform an uppercut but I meet his fist with my elbow, which crushes his fingers. This leaves him open as I throw a punch at his right cheek, knocking him down to the ground. 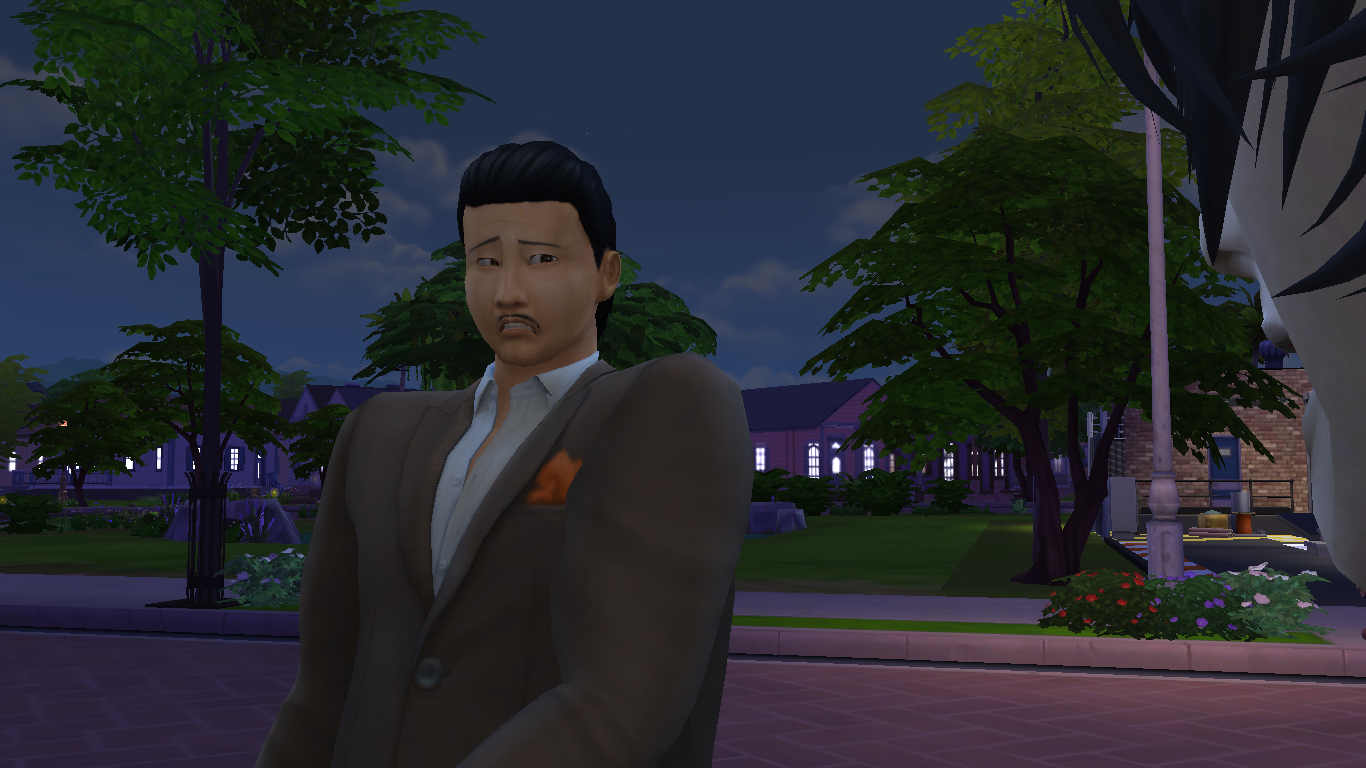 After doing this, the big man manages to land a hit on me and nicks my shoulder with a weak jab. He looks like he regretted doing that after I glare at him, so I lunge and grab him by the collar. I punch him once, twice, and butt my head against his, leaving him down on the ground.

The man in the white suit now screams as he brings out a butterfly knife. He brandishes it and makes a stabbing motion towards my chest, but I grab his wielding arm to crush his elbow, making him drop the knife. Silver is a no-no for me. 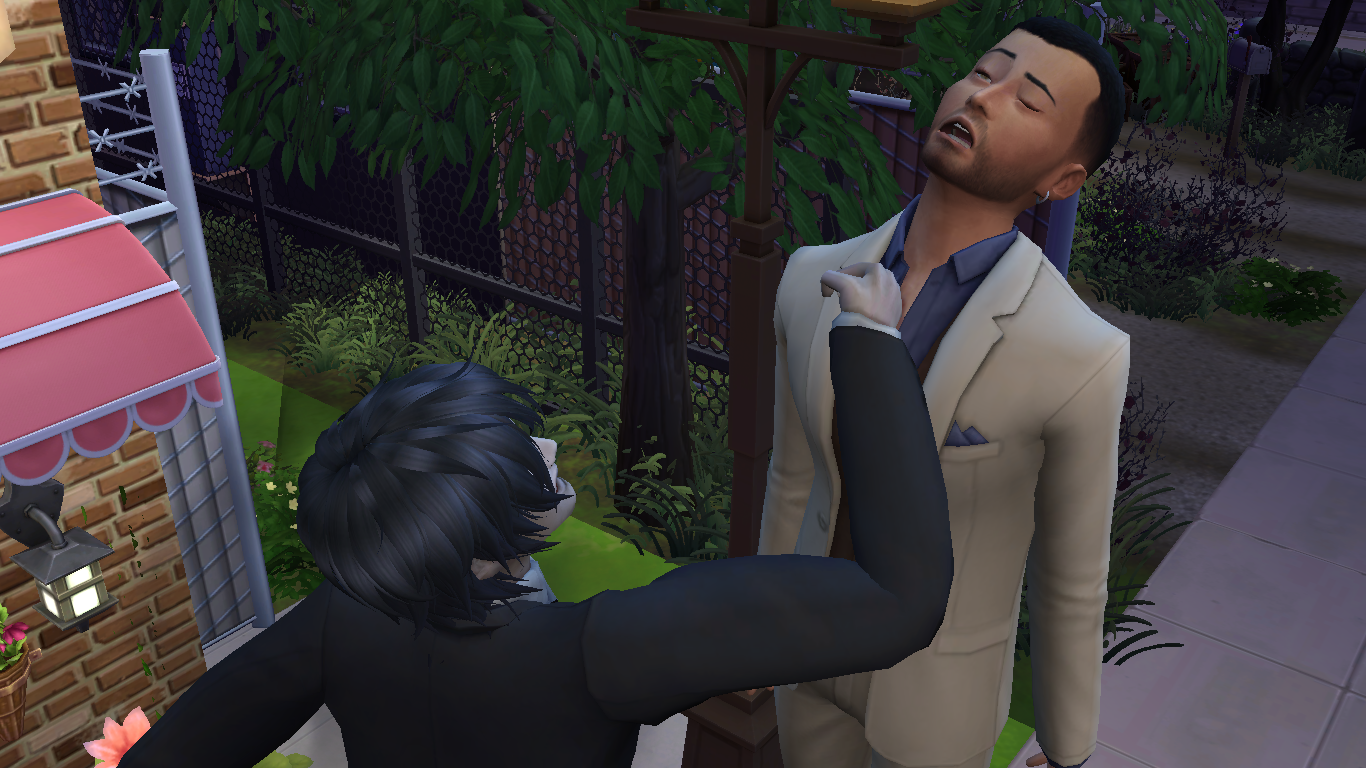 To finish him off, I grab him by the collar, jump up to the air, and slam him down hard to the ground. It looks like I took care of both of them, but I notice that the man with the spectacles has gone missing.

And then a gunshot.

The sound rings throughout the area as I see that the man with the glasses fired the shot. Now I have a bullet lodged in my right abdomen. Oh dear me. This is just amusing. Simply amusing.

This is just hilarious!

“Listen well, yakuza.” I start walking towards him. “Man has invented so many weapons throughout the ages.”

“And I’ve seen people fire all kinds of things at me throughout the decades.”

“Have little effect on me.”

The man looks panicked as he runs out of bullets but still tries to pull the trigger. Seizing the opportunity, I lock the man into an embrace and start drinking from his neck. Only enough to make him faint. I need to save my appetite for the soiree. The man then falls to the ground as his companions struggle to get to where he is. They’re pretty resilient for humans, I must say.

Looking at where I was shot, I figure I’ll just remove the bullets at the party. But these also made several holes in my clothing! There’s one on my pants, one near my left sleeve, and another near my lapel. These cretins will have to pay for the damages.

“Boss!” the man in the white suit limps and coughs as he looks at him. 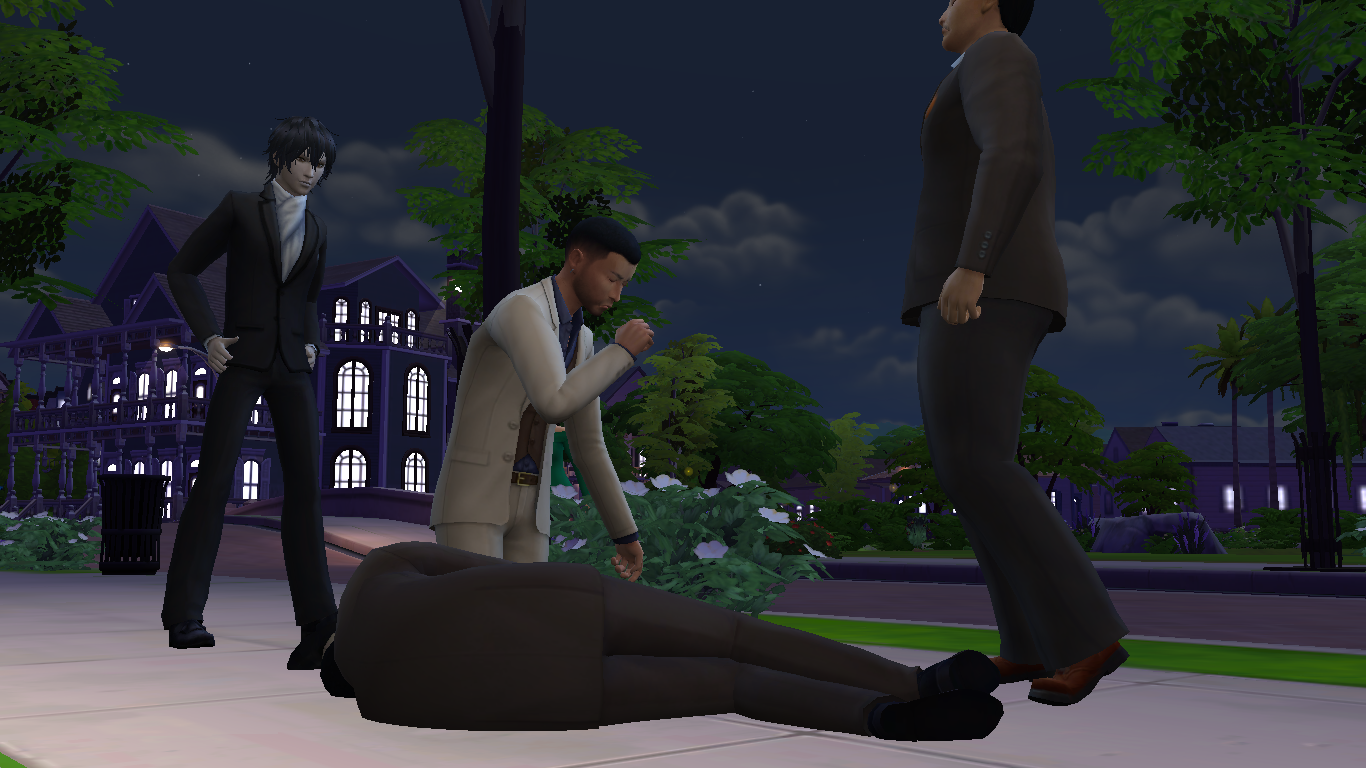 “You’re yakuza from Little Asahi in Central Newcrest, aren’t you?” I ask the big man who looks meek.

“Y-yes we are. We give up! We’re very sorry.” he bows, typical of people from Asahi.

A simple apology won’t cut it.

“From what family?” I try to confirm, knowing that there are around seven yakuza families from Little Asahi.

“Araki Family, sir.” the big man says before the man in the white suit could tell him to zip it.

Mitsunori Araki, patriarch of the Araki Family, is an old acquaintance of mine. I met him at an art exhibition in the past and we have been in contact ever since, making all sorts of art smuggling deals. He once got me an incredibly rare woodblock painting from his home country, which is now part of my collection; and I still haven’t finished paying it even after all these years. I see an opportunity here.

Summoning my extensive knowledge of languages, I speak to the big man in Asahigo, their native language.

“Your patriarch and I know each other. Tell Mitsunori-san that my debt to him has been repaid by letting the three of you live. Our art trade deal is also off unless he apologizes to me in person. He also owes me 500k, for when you tried to extort from me earlier.”

“H-he knows our language?” the man in the white suit looks with surprise.

“U-understood, sir.” the big man prostrates himself on the ground, speaking in Asahigo this time. “On behalf of the Araki Family, we’re very sorry!”

“We’re very sorry.” the man in the white suit tsks and gives a half-hearted apology. But I lean in close and threaten him with my fangs. 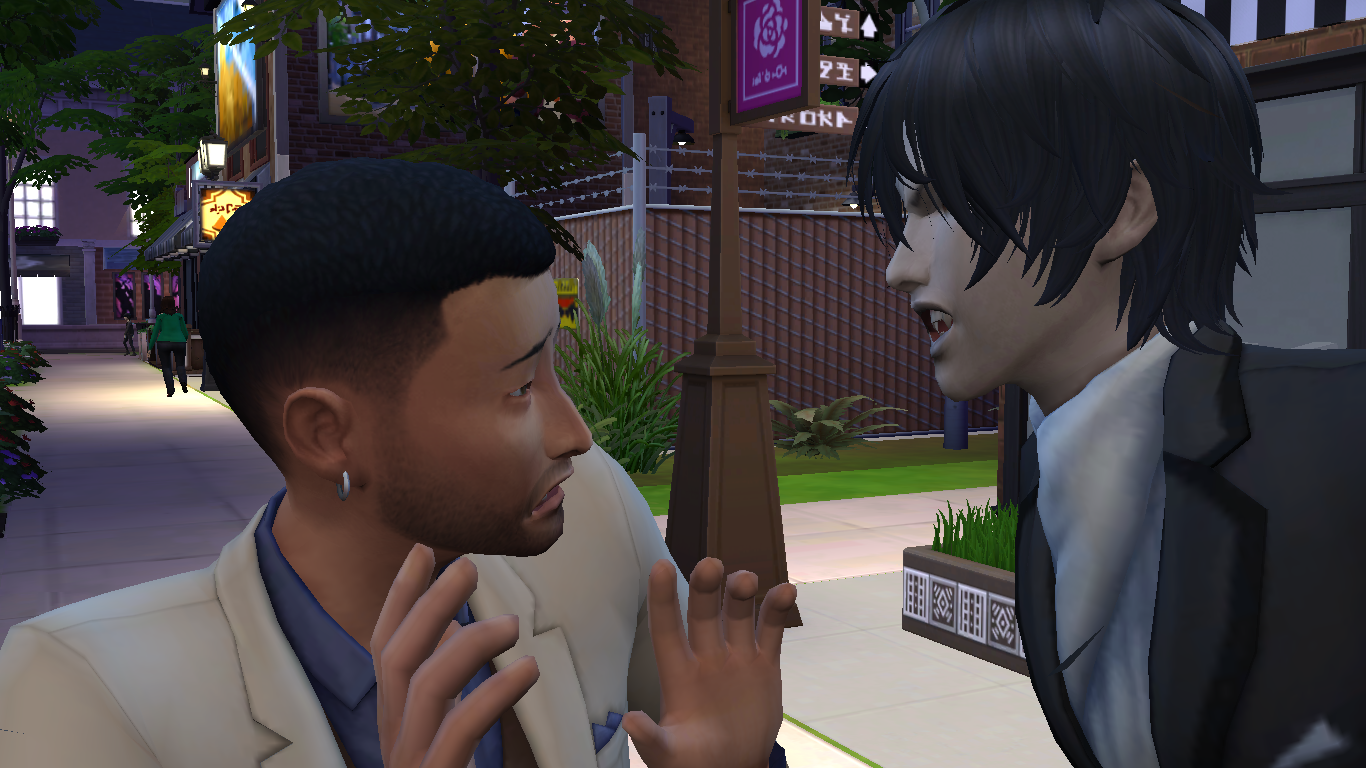 “The next time you or any other Araki man trespasses into my territory, I will not let you leave with your lives.”

“Forgive my boldness, but to whom will we be sending the money to?” the big man asks while his head is still down.

I point to my hideout nearby which is the abandoned soap factory and resume walking to the party.

“Send it to Dr. Domingo de Guzman.” I look back at the two men who are now trying to get their unconscious leader up and the big man acknowledges it with another bow.

2 Responses to Undead Bites 4 – The Yakuza