“Found anyone we can shakedown for cash yet?” I look at my heavyset lackey named Harada, who just joined our ranks recently.

Our patriarch gave us the order to look for new waters to fish from. The recent property development in Northern Newcrest caught the bosses’ attention, so we got sent here to look for fresh meat to extort money from.

“Not yet, Ikeda-san.” Harada replies with meekness. That’s not how a proper yakuza should answer. I adjust my glasses and look at Harada closely. 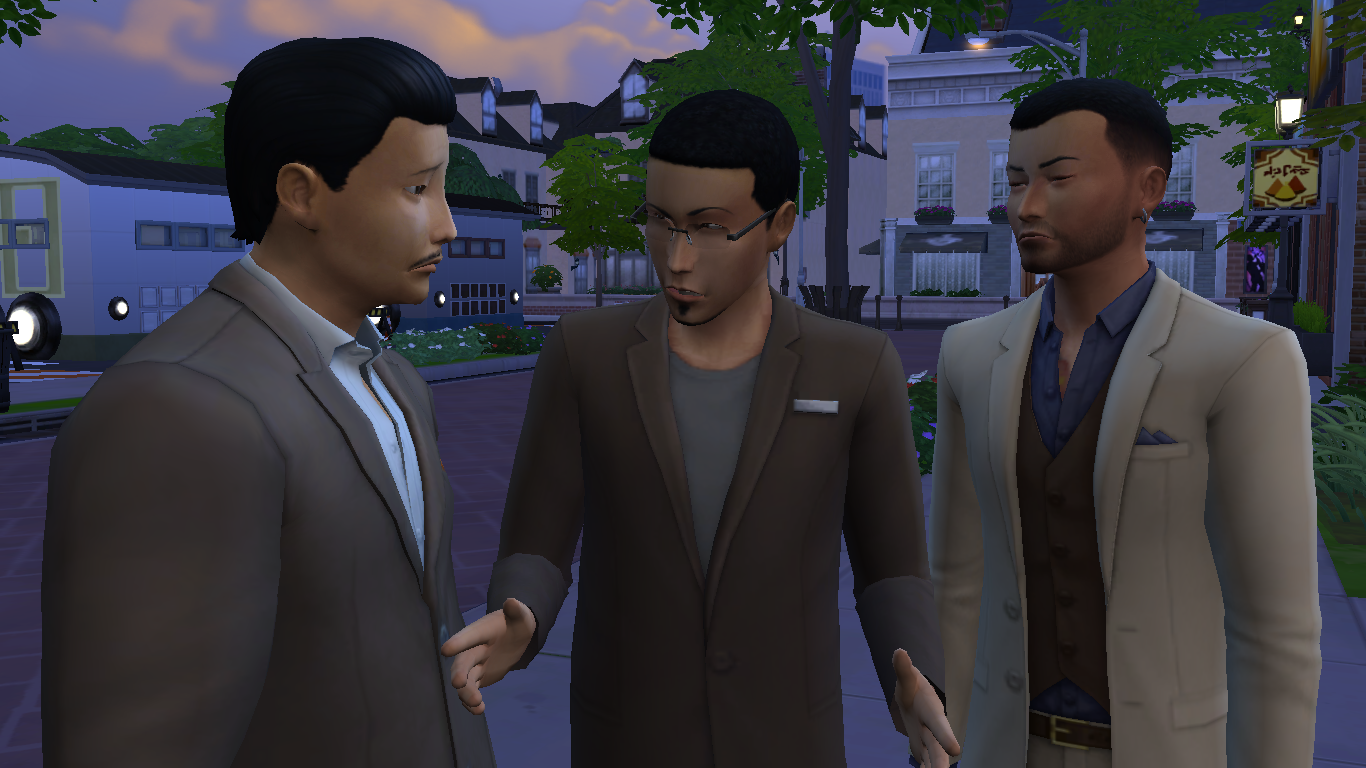 “Raise yer voice and stand up straight!” my subordinate Taniguchi instructs him. “Ya gotta get the accent right, too.”

“Perfect. Just like how any member of the Araki Family should sound like.” I tell him. “But you’ve still got a long way to go.”

“We should be getting down to business soon, Ikeda-san.” Taniguchi reminds me. “This should be a good opportunity for our newbie to learn the tricks of the trade.”

“Of course, Taniguchi. You already know how this works, don’tcha, Harada?” I look at our new recruit straight in the eye. 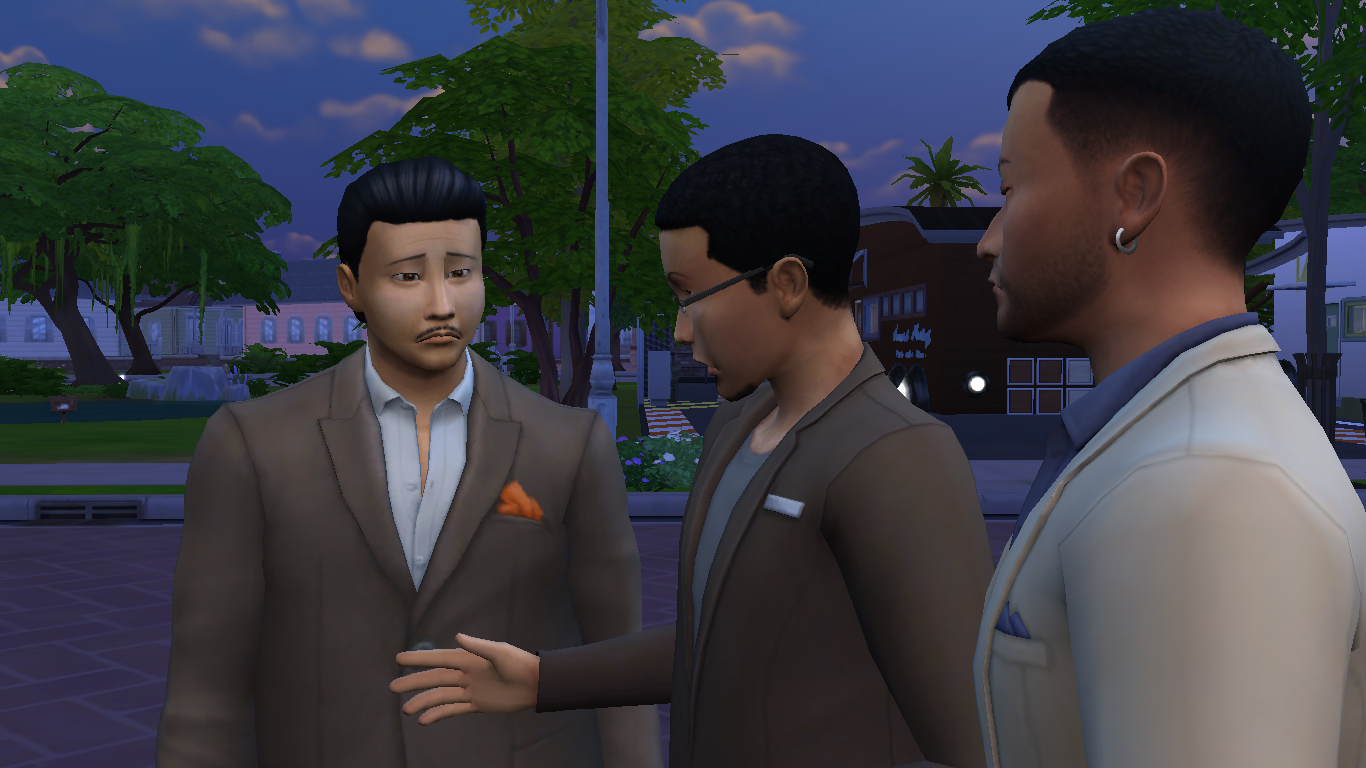 “Ah, yes sir. We scout the neighborhood for a potential victim and extort money from him.” Harada answers.

“Or her, if we’re lucky.” Taniguchi quips and chuckles. “Why, just the other night at a love hotel–”

“Save that story for another time, Taniguchi.” I stop him with a hand and direct both of my subordinates’ eyes towards somewhere in front. 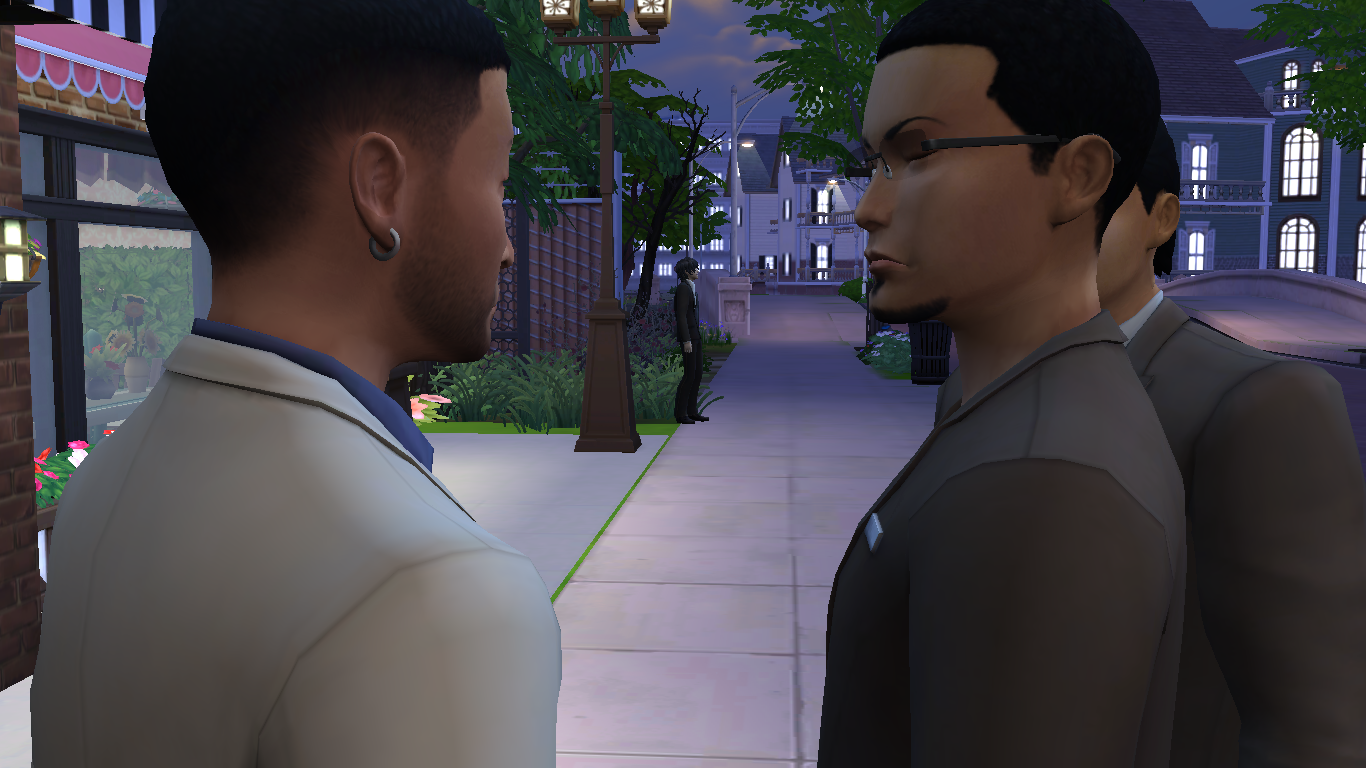 “He looks like a potential victim.” I tell the two. “We’re in an isolated part of the neighborhood and he’s wearing a pretty expensive-looking suit.”

“Well we ain’t gonna extort money out of ourselves, aren’t we, Harada?” I look at Harada as he backs away. “How about I just get all of your money and call it a night, eh? Have you ever thought about that, Harada?”

Taniguchi then clears his throat. 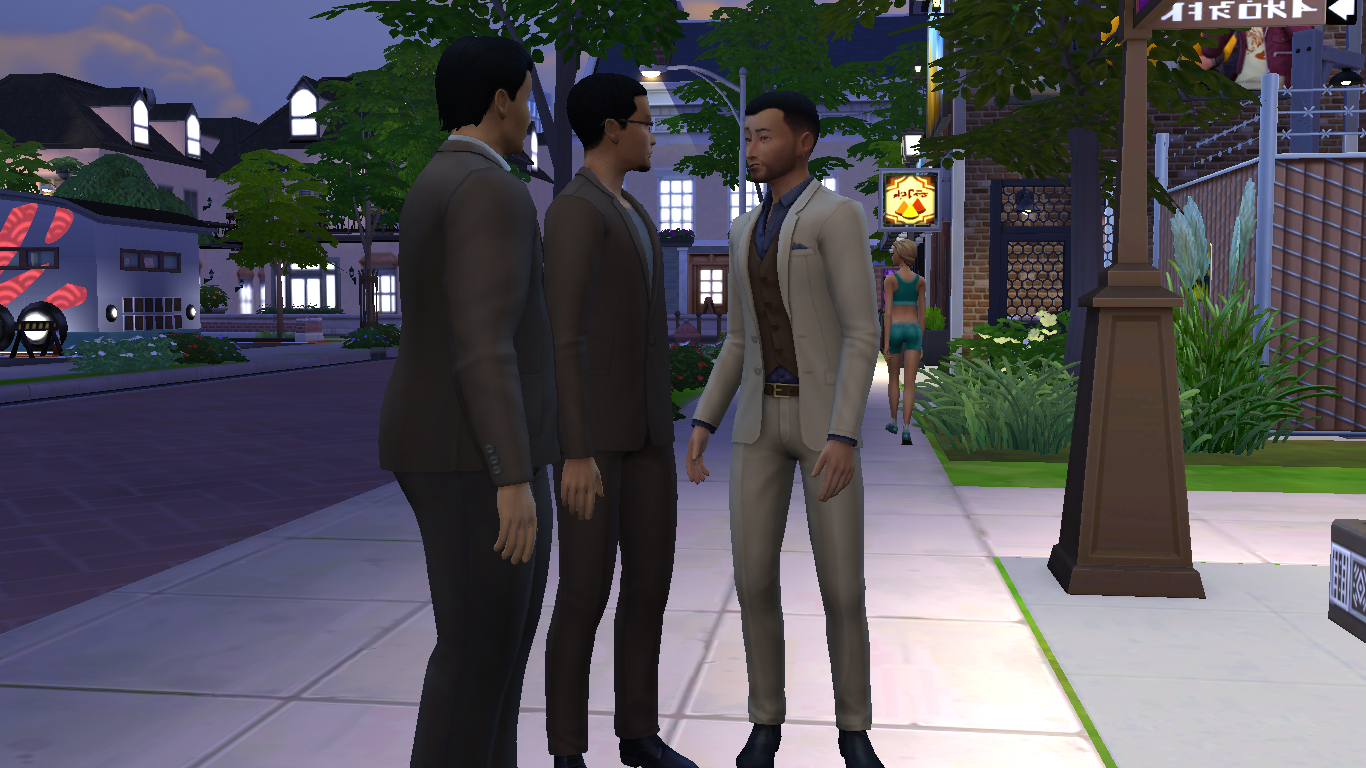 I look at our target and think about what we could pull off. I’ve done plenty of shakedowns ever since I joined the family, so this one should be no problem. We could bump into him on purpose and pretend to get hurt. Then we ask for money in damages. Or we could go with the classic loan shark approach. Badger him for money he doesn’t really owe until he gives in. All right, let’s go with that.

“How does that work, boss?” Harada asks.

“Don’t say anything. Your large build is enough to intimidate anyone.”

“Here he comes. You know what to do.” I tell Taniguchi. 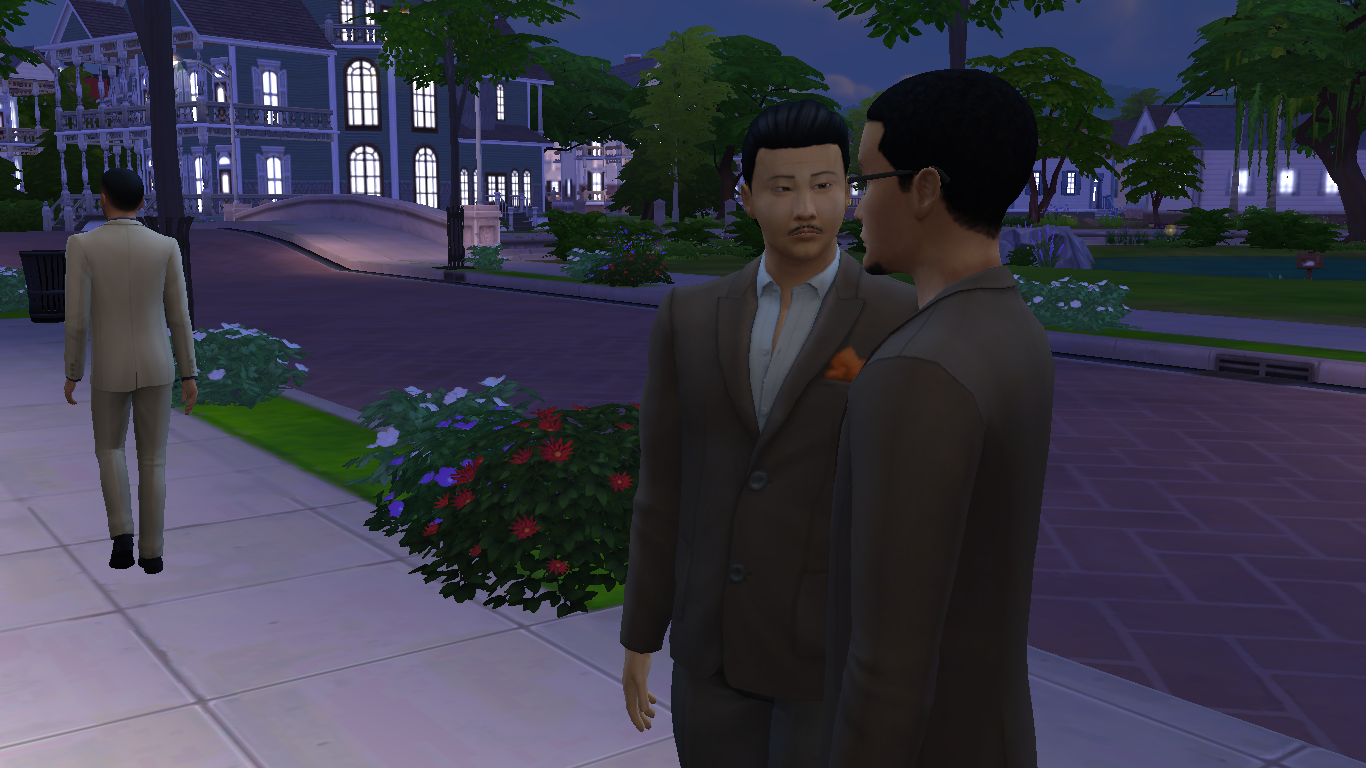 Taniguchi nods and starts walking towards the man. He’s always the one who warms up the victim before I jump in to add more pressure. In past shakedowns, we already got the money after I stepped in, so this should be just another typical job. We got into a few fights before, but a little beat down should solve that. Now that we have a big guy like Harada with us, it should intimidate people more into giving us their money. 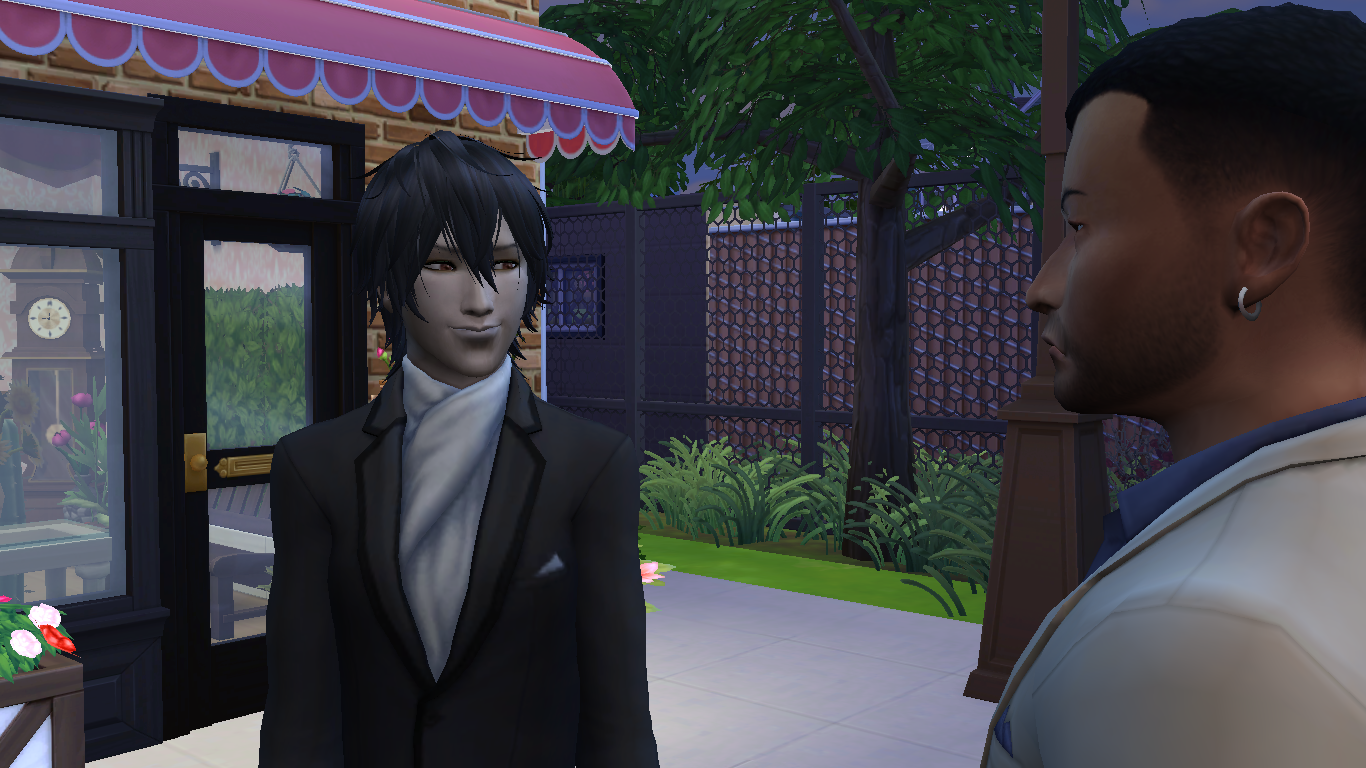 “Oi, you! Where’s that money ya owe us?” Taniguchi calls out to the man.

This target of ours looks like some eccentric upper-class prick with that getup and poise. Makes me wonder if he’s just visiting this part of town and he got separated from his chauffeur. Well, he picked the wrong neighborhood for an evening stroll!

“I beg your pardon?” our victim speaks with this accent I’ve heard from rich businessmen-types. Like our bosses’ clients.

“Ya know what the hell I’m talkin’ ’bout!” Taniguchi presses on. “Ya took out a loan of 500,000 simoleons and still haven’t paid us back the damn money! It’s been four months!”

“I’m very sorry to hear that. But I do believe you have mistaken me for someone else. I don’t owe anyone money.”

“Nah, you’re the one the company told us to look for. Now stop playin’ dumb and pay up before we jack up the interest rate.”

At that point, I gesture Harada to come with me and order him to flank the victim from the side. I then stand behind Taniguchi to add more pressure and play the good loan shark. 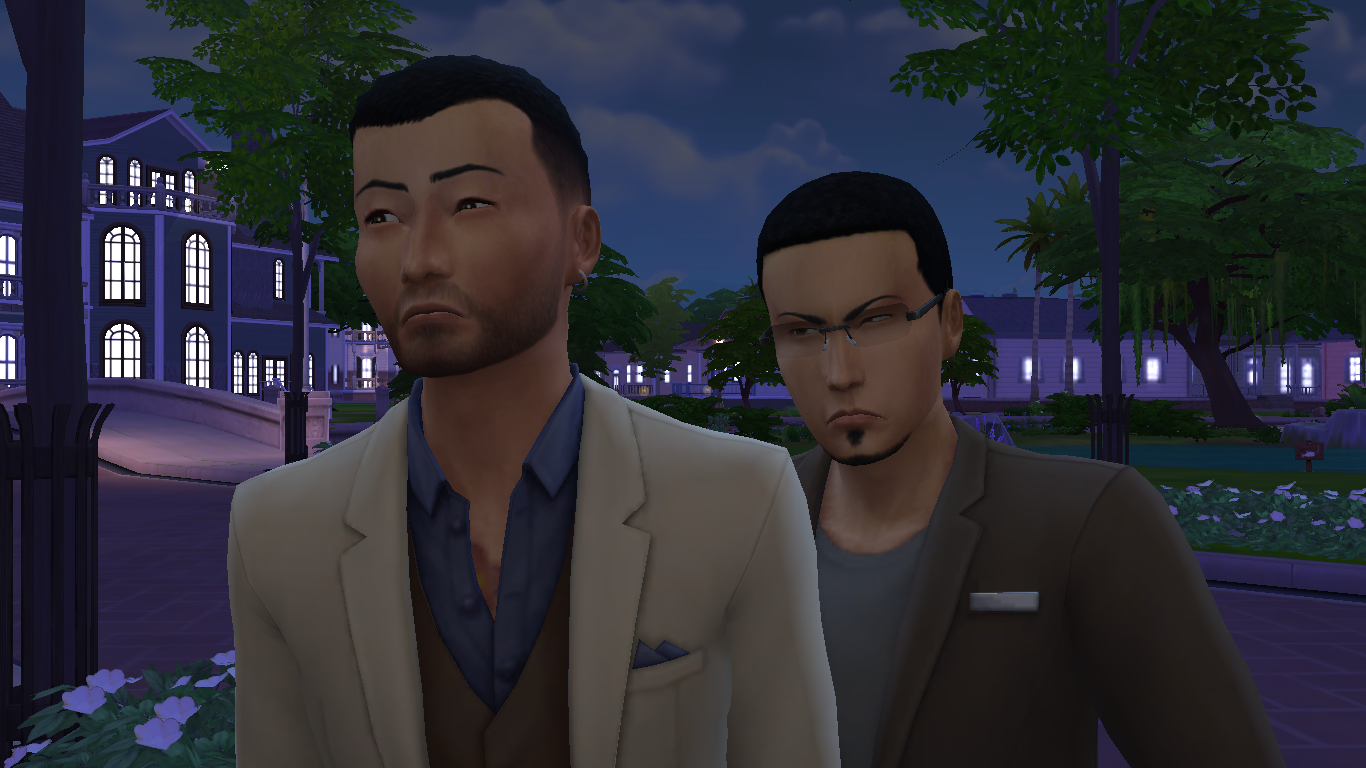 “Failing to pay your debts will be dishonorable for you, sir.” I tell our victim. “Sincerity Finance only wants the best for their clients in order to create win-win situations. And it will definitely be a win-win situation if you settle your outstanding balance now, sir.”

“Ya heard him. Unless ya wanna get a beating, ya better pay up now.” Taniguchi adds. 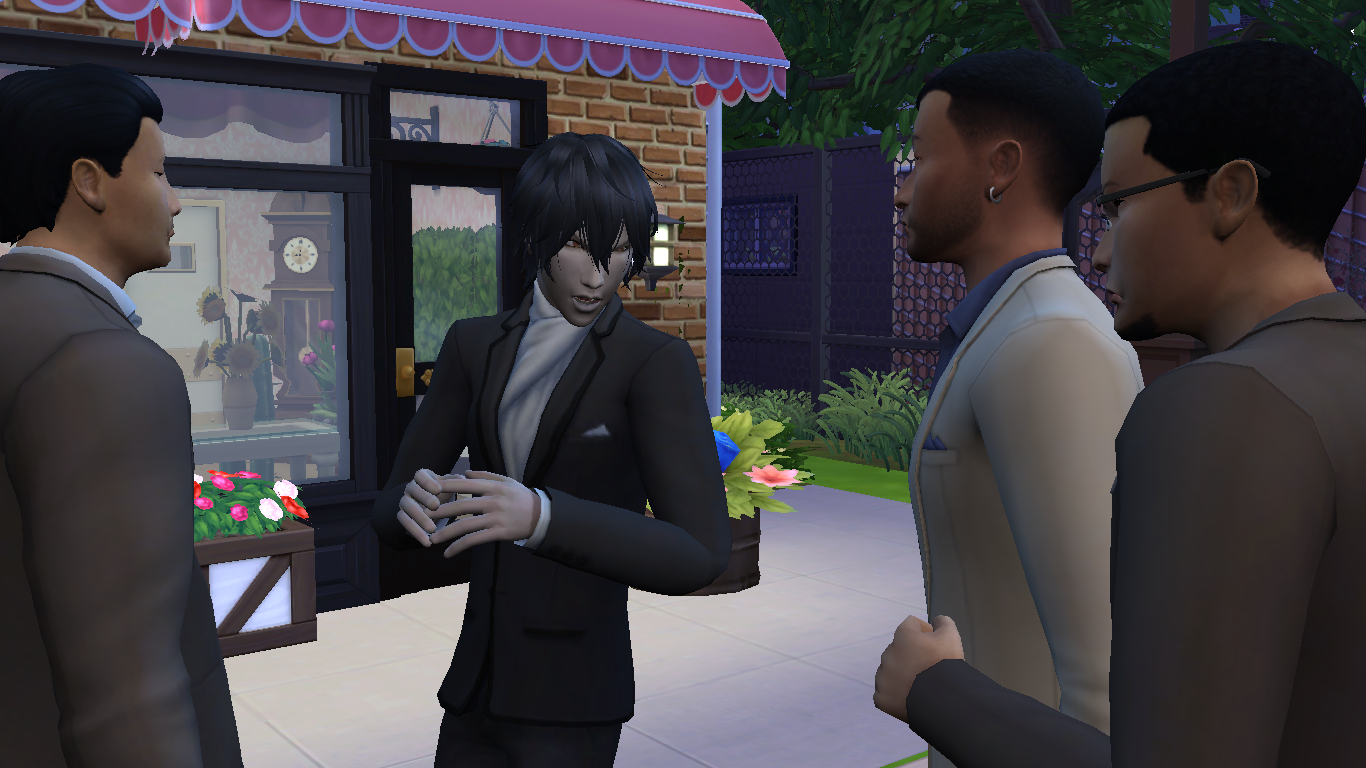 “But I’m telling you gentlemen that you are sorely mistaken! I don’t have your damn money! And I’ve never heard of this Sincerity Finance or whatever!” the man denies. “Now let me through! I’m a very busy man.”

“Sir, we are just asking you to pay us your outstanding balance. Please don’t complicate things for both of us.” I speak in a polite tone.

“Don’t make this hard for us, pal.” Taniguchi tells the man. “We just want the money and all ya gotta do is pay the 500k.” 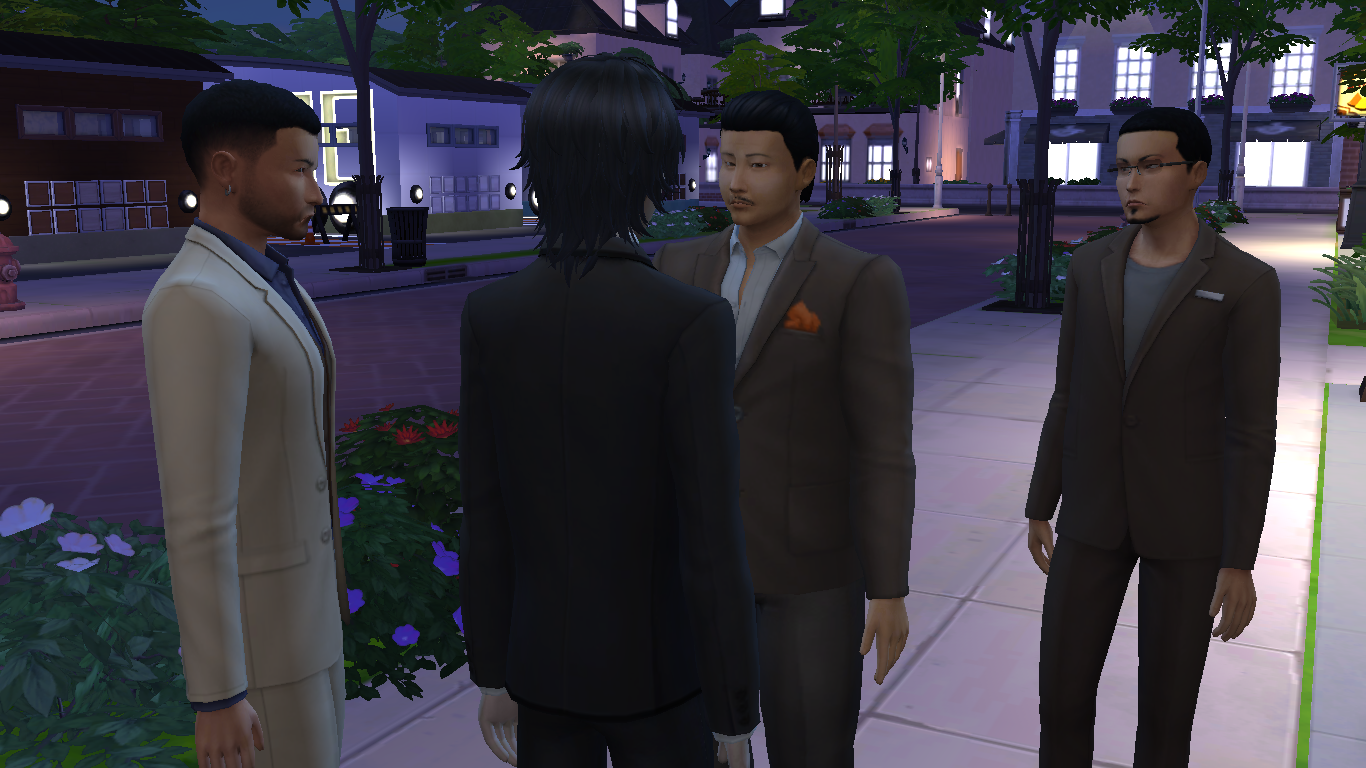 The man tries to get past us, but Harada blocks his path. I move beside Harada to prevent our victim from escaping.

“For the last time, gentlemen. I do not owe you any money. I am warning you not to make me angry.” the pale-skinned man makes an empty threat.

“Ya sound like quite the big shot, ah? What are ya gonna do, fight all three of us?” Taniguchi threatens him with a swagger.

But then something unexpected happens. Something our previous victims have never done before.

The man just smiles at us.

I’m taking a bit of a break from the main story, so I’m writing side stories like this one to keep the creative juices flowing. Hope you enjoy reading!

8 Responses to Undead Bites 3 – The Shakedown